Adam here! We’ll keep it short and sweet again this month, as we remain heads-down on trying to wrap things up in time for a late summer or early fall release.

We recently took the time to prepare a new gameplay trailer in preparation for ramping up the marketing efforts. This will certainly not be the last trailer we make, but it reflects many of the changes you’ve been reading about/seeing over the past several months (revised player sprite, wall climbing/jumping, new worlds, new enemies, etc.).

In case you missed it, here it is:

We’ve also ramped up the focus on the story lately. I won’t spoil it all, but suffice to say, our protagonists aren’t very bright and in their desperate attempt to find their way home, leave an (accidental) trail of destruction. This will be conveyed through a combination of cutscenes, scripted events, and dialog. Here’s the most recent progress on this front: a brief cutscene in which you can see the protagonist’s ship warping to the next planet, and an interdimensional rift left in their wake.

For this one, Nathan leveraged 3D modelling/animation to help give the art a strong perspective:

Apart from that, we’ve been tying up loose ends with world 4, which includes several new enemies, and most importantly, a final boss.

The theme for world 4–in case it’s not readily apparent–is organic/electronic. As you can see, there is a strong presence of technology, but with lots of overgrowth, rust, etc. We’ve extended this to the boss, which is half computer, half alien. 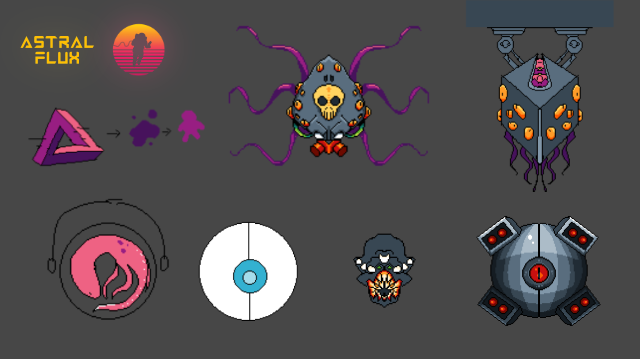 The boss battle itself is loosely inspired by bosses we’ve seen in Soulsborne games. You know, the kind of whac-a-mole design where you need to take out a few smaller enemies, reveal the big boss, do some damage, rinse, and repeat. It’s my first time designing a boss like this, and I had a lot of fun doing it.

Well, we better get back to it! If you like what you’ve been seeing over the past few months, please consider telling a friend! Every wishlist we receive equates to better launch visibility, which equates to more players, which in turn equates to us making more games. 🙂

That 3D ship cutscene is amazing. And cool DeLorean in one of the screenshot-gifs!