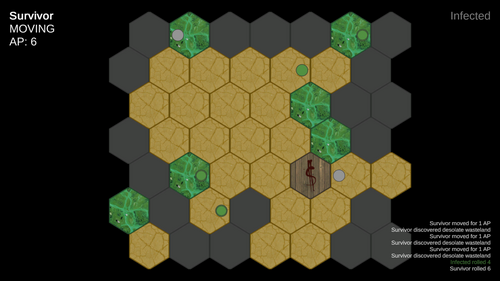 I guess I'm at the halfway mark! I can feel the clock ticking... 😅

I've also added some basic help text, plus an option to end your current turn in the scenario where you don't want to use all your action points:

Side note: shout out to Odin Inspector and Serializer! With it I was able to serialize my help text dictionary in a matter of seconds:

Plus it adds tons of little quality of life improvements. Well worth it!

Tonight I'm hoping to implement the actual card mechanics, which I suppose will also include adding a form of currency. I will likely keep the card limit at one for now, just to get it going, but I was thinking the real limit will be more like three. I expect the most challenging part will be implementing the card actions, as it will likely require adding a new state to the state machine plus a bunch of conditional logic.

Still lots to do, but I'm feeling hopeful I'll have something to show for it!

P.S. here's a super early (pre-pre-alpha) web build for anyone who feels like giving it a go in its current state

As far as it goes, it seems to work well enough, and be reasonably fun to play. ^_^

One thing that I'll say is that the infected never really feel like a threat, since they never seem to attack the player.

Aye, the enemy AI is basically non-existent right now, they just move around randomly for testing purposes. The plan is to have them do one of a few things: discover hex tiles, try to mutate, attack the player.

Thanks for taking the time to check it out! 🙂

Fair enough! I hope to see a build with AI implemented at some stage, then! ^_^

And checking it out was my pleasure. ^_^